The Five to Nine Traveller

Because life is more than your 9 to 5 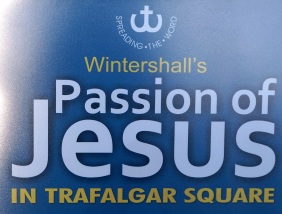 Every year on Good Friday, Wintershall Charitable Trust perform the open air play, The Passion of Jesus in London Trafalgar Square, telling the Easter story of Jesus’ last days, his crucifixion and his resurrection.

I have wanted to go see this for a number of years but usually I have been away on holiday or back home in Newcastle so I was delighted that I would be around to see this free event in London.  I organised a small group of church friends to go watch it.  It was my first open air play and what a good day to see it as the sun was shining down wonderfully.

The play began with Palm Sunday as Jesus rode in on a real donkey and we watched various scenes in Jesus’ life such as when he healed a lady from a skin disease and when the Pharisees were asking Jesus questions about his teachings.  We even got to see Jesus get angry as he started shouting and upturning moneylenders’ tables, flinging money about and releasing real live birds into the sky that were being sold in the Temple.

Jesus was played superbly by James Burke-Dunsmore who has made a living out of playing Jesus for over 17 years.  Ironically he was born on Good Friday too – a perfect fit!  He had the looks and definitely commanded the square when acting. However, not all the acting was up to scratch which is understandable since a few of those involved were amateurs who were volunteering their time.

The crucifixion scene was graphic and hard hitting yet staged beautifully in Trafalgar Square as Jesus’ hung there with the two criminals either side of him.

I got to snap Jesus carrying his cross as he walked up the stairs and around Trafalgar Square for all to see.

This play was truly an immersive experience as the whole of Trafalgar Square was used to its full space with the Roman guards marching up and down stairs and around the square and Jesus himself utilising the steps of Trafalgar Square to make his entrances that more grand.

Below are some more visuals from the play…..

Jesus appearing after his resurrection to…

I would highly recommend going next year to hear the Easter message.  It is an excellent way to teach children what Easter is about.  Hope you get to catch it next year and one tip: Get there early for good views!

Hope you had a lovely Easter!

Search The 5 to 9 Traveller

Hey I'm Tayo a travel luminary who wants to inspire others that life is more than your 9 to 5. Holding down a 9 to 5 yet I'm always seeking adventure packed travel both in the UK and abroad and you should too!